the case of the vase 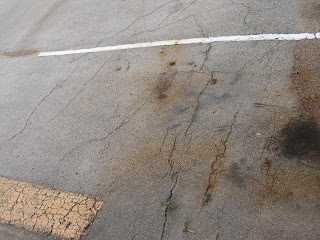 I've been working harder than I've ever worked , artwise.  I've always worked hard and when I 'became an artist' I think I actually worked more time wise but less physical wise.  Since going full blast with my vases this summer I have felt at times like I am on some bizarre trip that is never going to end.  I can't for the life of me understand why I take so much pleasure in setting up all my crap out in the business parking lot, day in and day out lugging and hauling shit that always makes my back cringe, and doing basically the same thing over and over and over.  A few hours of cutting pipe, grinding all the sharp burrs and I'm toast.  And I feel good and tired.  The pipe thing blows my skirt up.  I dig it.  I can't get enough of it.  I'm like the little kid who eats mud pies or grass.  Did you ever know those kids when you were young?  They were missing some specific nutrients and got it in the dirt. I seem to be missing some elemental nutrients, I can't seem to get enough of the metal. Look at the parking space next to mine....I'm using it much as I can and hoping no one notices I've slowly ruined it.  It's a mess and I just hope a good rain will make it more normal.  My neighbors seem to sigh with their eyeballs whenever I'm out there, below you can see our little walk area up to our steps and the neighbors pass by there too.  That is where I set up my grinder on a table and spend hours grinding the pipe ends that I just cut.  They must think I'm insane. 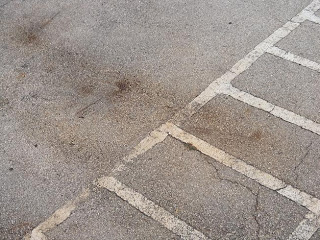 I think I'm insane.  The flower thing hasn't been high on my list as I'm still in vase mode.  Other than what I made 2 weeks ago I've not made any more.  Lots of online time for the etsy team I belong to.  Lots of vase time.  Some nasty apartment cleaning and there ya go.  Life day in and day out.

I feel like I'm more boring.  Haven't as much to say here on the blog or on facebook.  Reminds me of when I hit the road before I became an artist, how I was just in the moment of being out there and rarely thought or talked about what I was doing with anyone.  It isn't all that interesting, but it is all consuming.

There are good things to report for those of you who are interested in Paula Wahla's World.  I've had a total of two commissions for pipe vessels.  I sometimes call them that because they weren't being used for flower vases.  They were successful and the people were genuinely happy with what they received.  I have had another one this past week and just finished the vase and will see if it meets their vision.  The gallery in Vermont sold one of my mixed media photo pieces, leaving me with just one more piece there, I'm crossing fingers that sells even though they've had it over a year.  I'd hate to have them disassemble it and just send me the photo back as I can't really afford to have the whole thing shipped.

While I'm not getting rich, these little vases, being the most inexpensive 'art' I've made have done me well this summer.  I've sold 50? I've got 16 or so on Etsy right now with another 20 made and as of tonight, 20 more in the queue.  The big stack at the scrap yard is GONE so my little stash under the porch steps is it.  Maybe then I will have time to work on flowers.  Tod is working on bunches of flowers that are not necessarily fast to make, but relatively easy and we hope to show our vases and flowers at an upcoming Sam Houston University thing. They are calling it Falling Flowers and there is a chance we could have some vases/flowers on show.  Very tentative and I've not even spoken to anyone about it, this was just mentioned to me as a possibility from someone working with the Falling Flowers part.  I'm also hoping to get my vases into the Art Center here in Huntsville.

Little awkward baby steps.  Starting all over again.  I'm worn out and welcome it.  Tod and I stopped volunteering for the Phoenix Commotion as this flower/vase thing literally eats up every day.  We are always searching/cleaning/working/doing something it seems that has to do with this body of work.  I seek newer tools and am seriously considering making a kickstarter video to see if I can kickstart myself into a more productive way to work.  More on that later.  I just have to say, THANK YOU to all the people that have bought vases.  Thank you to the people that have told me these vases are amazing and kept pushing me to keep doing it.  Invisible ropes of hope that have led me further down the rabbit hole and opened me up in many ways.  I get so much joy out of the reactions you have about the vases.....who knew old pipes could be so much fun!

deborah from collagewhirl said…
That's awesome about selling the mixed media piece!! And kickstarter would probably be a great thing to do. Yay for the commissions too :-)
9/13/10, 10:32 PM

Viktoria said…
Yes, really an inspiration to read this!
It´s great that the vases are that successful!
...to work with metal must be very satisfying to you!
All the best for getting them into the art Center!
9/14/10, 7:11 AM

Kim Hambric said…
Paula, you are the kind of person that can jump off the board into the deep end. You've done it and now you're swimming.

deb said…
As Kim said you are totally a leap with no net kinda gal, and wow do I admire and envy you that and your honesty! And those pipes...well they are just fabulous. Keep on truckin!!
9/14/10, 7:56 AM

Kendra Zvonik said…
It is so wonderful to hear you talk like this, Paula. I am so happy to witness this new, positive direction and thrilled to own a vase!
Makes me laugh to think of your neighbors watching you and wondering what the hell you are doing?! Also, sounds so fun to go out searching for metal with you. I can see you all dressed in black and scaling fences . . . on a mission! Yeah!
Sometimes it feels so much better having nothing much to say. But, let's stay in touch and continue to support and inspire each other :) I enjoy this friendship so much. My best to you & Tod.
xo kz
9/14/10, 10:05 AM

paula said…
well kendra, i'm not to that point yet of wearing black and scaling fences :) but i am on a mission and i do 'find' things sometimes....
i agree, better to have little to say, usually means you are on a roll. just like YOU are with your amazing surreal new sheets of green
YOU are an inspiration to me! and tod...and probably a zillion other people. thank you for being supportive ♥
9/14/10, 10:18 AM

Colleen Kole said…
I love your enthusiasm-it makes me have courage to try all kinds of things. But I love more that you are having a blast doing what you love- and you are so much happier! Keep going.
9/14/10, 9:17 PM

Teo said…
I was wondering what's going on in your world and I'm so happy to see that you are more and more passionate about the pipes. They are gorgeous, they sell well, you like doing them so it looks like you are in the right niche! I'm laughing here seeing the photos from your parking lot. If there would be like here one night you could just go and lay a new cement layer and no one would notice, haha.
xoxo
Teo
9/16/10, 2:57 AM

I knew I needed to do this years ago but couldnt release even one tooth from the etsy teat until the cup runneth dry which it has for a year or more.  In fact, a few of you may remember and have even purchased art from my very first microsoft frontpage made paulaart site.  I love the wayback machine....you can see some pages of one of the last renditions of it before I went full on with etsy.   How I savanted THAT is something I'd pay money for to do again!  I had no clue what I was doing and yet managed to get sales from complete strangers for gods sake.  And yet today, with all the knowledge/experience I purportedly have (and all the bells and w…
Post a Comment
it goes on....
November 16, 2015
now i remember another reason i stopped blogging...i have been dickering around with trying to upload 2 photos with links and captions for longer than i should.  much easier to just do it elsewhere.
lets try again....

year 2 of my flowers going to Bareburger!

February 08, 2019
I'm on a flower roll and Spring is on its way! Last year around this time I was asked by the co-founder of the restaurant chain  'Bareburger' to make 2 dozen of my first ever 'wall pocket' flowers to be combined/displayed in another artists wall pocket vases.  Since then I have made 60 flowers total and just got asked to make another 2 dozen for them.

Bareburger sources much of their meat and vegetables from local organic farmers and has over 40 restaurant chains in the US and worldwide.   I love that they like to use repurposed artin their restaurants and I'm very pleased to have some of my little flowers adorning their walls!

If you'd like some indoor or outdoor tall or short flowers check out my flower section on my website or go to my etsy shop for a slightly larger selection (i'm still working on getting traffic to my standalone website so inventory is a bit lower).  Keep in mind if you purchase from my Paulaart site you can get a 10% discount …
Post a Comment
it goes on....