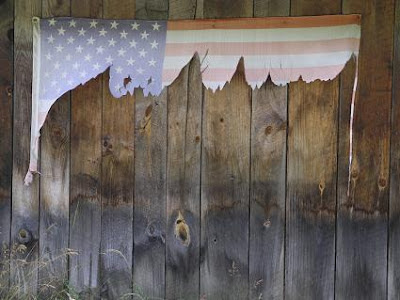 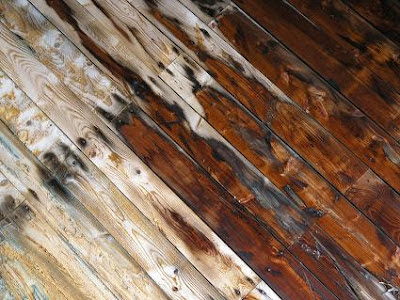 Inside of a salt shed 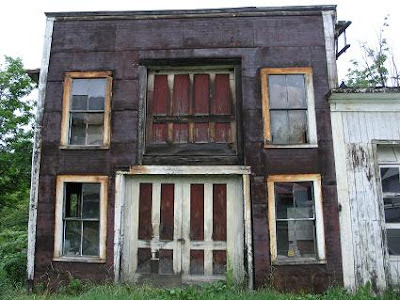 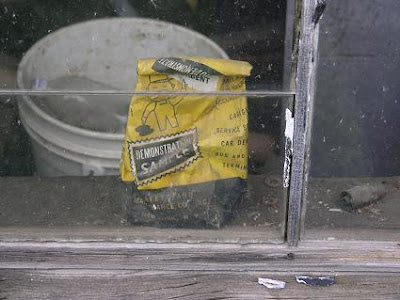 close up window of building 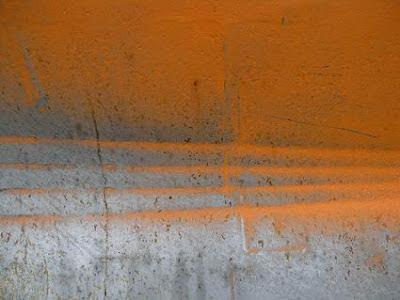 Tractor Paraphernalia
(another reason I don't paint, this is what I would paint
if I could and here it is, all stretched out on the
road for me to shoot a picture)
Yesterday the roommate and I stared the clouds and rain down and went out in the VW bus to explore more of Vermont. We went up north a bit, took dirt roads and state routes in search of interesting picture possibilities. I took a record 147 pictures, that's a first for me. Got at least ten that are what I deem printable and usable for my mixed media pieces. Some of them thrill me even if I wont use them for my art. The first one of the tattered flag is one I wont use because the lighting sucked and it was under a ledge with a big mean dog parked on the porch (tied up) nearby. It was the sort of property you expect any minute a scroungy scary dude is going to emerge with a gun going off aimed in your direction.

The salt shed we found behind a mysterious building was fantastic! I will post some more pictures later. Fabulous colors...blues and bubbly foamy looking walls. I had no idea what it was but my sidekick said it was a salt shed. I would never go to these places alone. Sunday afternoon, parked behind a building, I'm off taking pictures while he peacefully sits (I never can believe he isn't bored but his actions tell me he is quite satisfied) and a big old car comes creeping back there with us. Its an old man. Now what is he doing back there? Just sittin. I don't want to know; he sat there and my roommate let him know I was a photographer taking pictures but he wasn't the property owner, he said he was a local and offered no other explanation; he stayed there even after we left, just sitting with some crazy country music playing on the radio. Another car zoomed in and out after someone exited to pee I am assuming. Not a place I would want to be alone.

We kept travelling upward. Such poverty. I never can believe people live in the shacks and trailers, mismashed looking homes that are filthy looking even from the road. How these people get through the long winters is beyond me. Mile after mile of dilapidated homes with porches and windows stuffed with junk, places we would swear were abandoned are filled with cars and people. Dogs. Animals grazing in junk yards with 'fresh meat for sale' signs.....its a bit disturbing. I never feel like I am in America when I drive around the back roads of Vermont. I've yet to be in the south for any extended period and to see the harsh poverty that I know exists there, but I tell ya, everything here looks like it was built 100 years ago and is ready to collapse.
It's beautiful, inspiring and a great place to hunker down and make art. I have to just stay focused on that. Looking forward to more outings, I've decided to take advantage of having this big basement to work in as long as I can, there is still a relocate button flashin above my head. 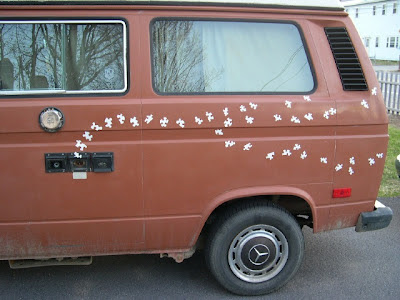 Nellie's Needles said…
Of course! Puzzle pieces! Whatever else would you decorate that van with? Funky!
7/9/07, 7:04 PM

joyce said…
love these photos and your description of the way some people live. It always shocks me that this type of poverty exists in our midst.
7/10/07, 8:13 AM